A friend of mine just borrowed me the his EF12 II extension tube. But today i had no time for some more shots so i just took too two in the kitchen… 🙂

It is really amazing how close you can get to the objects. Also all features of the camera are usable. I used my 18-55mm EF-S IS II and i’m really impressed what you can get for 75 €! Today hat had a short trip to the Höhenstraße in Wien and had the chance to take this picture.

Vienna at Night from Kahlenberg

Vienna at Night from Kahlenberg Vienna at Night from the DC Tower

This picture is taken from the DC Tower in Vienna and where made by stacking four different pictures to reduce noise.

Vienna at Night from Am Himmel

The picture above is taken from Am Himmel. It’s a bit shacked because even the tripod was moving in the Wind at this late December night in Vienna.

Some people ask me, where to find a good spot to have a great view to the stars. For Austria, this is a good link to follow. There are also a lot of other sites, just search for light pollution. There are also overlays for Google Maps here.

The second thing to remember is, that you need a clear sky and no clouds. Above 2000 m, the light pollution is at the most places acceptable and the air is thinner and also the lights of the stars brighter.

Third, you need a long dark time span. In winter you will find the perfect conditions. Also to mention: if you hear in the news, that a weather inversion takes place, get your car and find a hill. The air near the surface will be colder than in the highs and all clouds will follow the cold air.

Fourth: As i said before, find the highest place you can get! The air gets thinner, the stars become brighter. So simple, so good.

Stephan Paukner from paukner.cc has also found some information and made a nice Google Maps overlay. 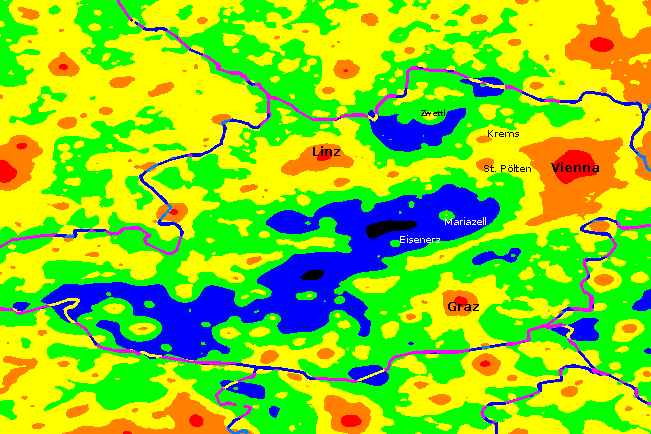 I’ve decided that i need a macro lens… but i can’t afford one… so i decided i need a Achromatic lens… can’t also afford this. BUT! Today i spoke to a friend and he told me he has a macro extension tube, used but in good condition. Next week i will try some test shots, hopefully the tube is worth 50 €. So, some pictures will come soon, but for this time, here some boring macro shots… 🙂 This is the, i think, somehow impressive star time lapse at the Alois-Günther-Haus. As I said, i used the standard 18-55mm IS II and my Canon 600D. I’ve Magic Latern installed on my camera, to get the interval mode and some other useful features. I also did some tricks and tweaks with Photoshop and After Effects.

At the first day in 2014, I decided not to stay at home and to cure my hangover. The first idea i came up with: what’s about a timelapse with stars? So I loaded my camera and went on the hunt for some food and warm clothes. I had an idea for the Location: the Alois-Günther-Haus. Unfortunately, I was a bit late, so there was a climb to the summit is no longer in question. But, “no problem” I think to myself, i’ve a car! Once at the road to the house I realized the road was unfortunately completely covered in snow and I had no snow chains. After several failed attempts I decided to try the way backwards.

8 Kilometers and three breaks later (the car starts to overheat quickly, because of no cooling from the front), I arrived at a nice spot and started immediately build up my equipment. For the shots, I choose my standard Canon 18-55mm IS II. The 50mm 1.4 Sigma is for sure brigther but at my APS-C (and the resulting ~80mm) the stars will be streaks with a exposure longer than 20s.

After some test shootings i had my settings. I used ISO 1600 and an 25 seconds exposure. I also set the aperture to the highest value, that my lens allows: 3.5 at 18 mm. This is what i got: Thereafter, I started a timelapse and sat in my car, waiting. Luckily i bought delicious ham and cheese for dinner. 🙂 Maybe I should buy a camping boiler.
After 1 1/2 hour I canceled my adventure, because -8 C and 80 km/h wind are no fun… But i think the result is quite impressive. I will upload this in the TIMELAPSE section later. So I took my stuff, drove to the house, get a coffee and hit the road straight to vienna.

Wine growing on the Kahlenberg.

I had just a short trip to the woods in vienna. This time i had a standard Canon EF-S 50mm 1.8. A pretty nice lens and also cheap. If someone want to go the first steps with a fixed lens, i can recommend this lens.

This is my first time lapse attempt. i think it’s quite OK for the first time. The music is from, Yellowcard – Believe. This video was shot with my 18-55 IS II and as usual my EOS 600D (with Magic Lantern). The location was the Alois-Günther-Haus.